A Kick in the Ass by Folkloristics

As some of you may know, I began writing this blog for two reasons: 1, to document the progression of my short film "Your Milkman" from inception to completion, and 2, to use it as an open forum for ideas for a personal thesis I've been working on for nearly five years now.

Obviously, the blog has veered and evolved into a greater scope of my personal education in film and observations on life in general.  I took some time off from working on the thesis; about a year and a half actually.  Occasionally I'd jot an idea down but I haven't done much more research on it for quite some time now.  Part of this sabbatical was to work on a few feature screenplays I wanted to write, and part of it was because I'd hit a dead end in supporting research.  The breadth of the idea quickly expanded from a little shell of an idea to a pretty large scale abstraction that spans across sociology, psychology, anthropology and communication sciences— it quickly became pretty daunting to me to work on, especially trying to regain footing on it and really finding the passion for the idea I had when I first began.  Now it required research and supporting ideas for folklore, mythology, pop-culture, child psychology... it was just the tip of the iceberg.  There were plenty of books available on each topic individually, but rarely could I find anything that bled between them so I got discouraged and just sat on it.

I had a friend and colleague, photographer and fellow academic mind with mad Reddit/Buzzfeed cred, John Cessna, look over where it stood about a year ago.  In essence his feedback came down to continued research and obviously, one of the worst parts of writing anything academic: citation.  I'd taken margin notes as I went along for citation but I haven't been that organized in keeping that its own document.  For shame!

So with my head spinning and my tail between my legs for not appeasing the citation gods, I just took time off.  No big deal... except it was an unknown amount of time and I just didn't have my bearings. 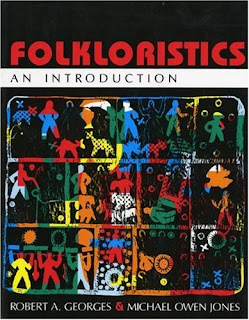 Fast forward a year later and I'm at a co-workers apartment reviewing an edit and I look over at his bookshelf and this spine is jumping out at me.  "FOLKLORISTICS" it says in big bold red letters.  "What's that?" I ask.  "Oh, it's this textbook I saved from a college course I took on Folklore and Pop Culture.  "What?!"  And like a prized Olympian firing off the running block, I dove for it.  Luckily, he was kind enough to let me borrow it.

I've been slowly making my way through it, meticulously making notes, quotes and examining references on every thought that comes to mind as I wade through it.  It's fantastic.  Most importantly, it's give me a long-lost footing to start thinking about the thesis again on both a macro and micro level.  So as I sit typing this, I've got the book open, only a tiny dent of the way through it and I'm already feeling that juissance I felt working on the idea initially.  Things are clicking and hey, I'm actually keeping citations this time.  It feels good to be working on it.  The carrot at the end of the stick for me is having a physical copy— even self-published and printed through an amateur site like Lulu, just so I can put it on my shelf and use it for my own interest.  I've made it a goal of mine to make that a reality within this year so here's to hoping!  Now if you'll excuse me, I've got some reading to do.