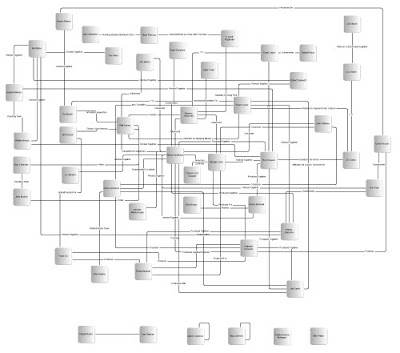 For the last few weeks, the filmmaking thesis that I've been working on has taken a back burner due to the ole' 9 to 5 and the production of Your Milkman. Well... sort of.

In this time, I began this sort of web flow chart project. If you'll recall, one of my first posts on this blog mentioned a list I had created of people whose work I felt lied in the realm of this thesis. I used those names and plotted out the interconnectivity between these filmmakers, storytellers, animators and artists.

After a couple of hours of cross-referencing notes, biographies, IMDB and the old reliable, Wikipedia, I began seeing a pattern emerge that spanned the entire duration of cinema and those who influenced it. There are core people in the industry whose names showed up time and time again. Those individuals ended up gravitating towards the center of the web. With the exception of a few outliers (who were either independent artists, referenced themselves, or I just hadn't found a connection yet), EVERYONE was connected.

The American Zoetrope crew, namely Spielberg and Lucas, and their regular producers, Kathleen Kennedy and husband Frank Marshall were at the hub, along with Walt Disney and Norman Rockwell. I was shocked to see how STRONG the bridge was between all of the key players and forms of media.

It would be silly of me to publish a full size render of my work so early on without going over it again to connect more dots. I'm going to hold off on that for awhile, because I'm sure there are a few that I just haven't read about yet. But I thought this was too fascinating to NOT put up at least my initial impressions of it.
Posted by Daniel No comments: