DP Kevin Moss On Board For 'Your Milkman'

We're pleased to announce that DP, Kevin Moss (Chicago Overcoat & Refuge) is now on board for 'Your Milkman'!

We're all incredibly excited to get to work with him on this project. The guy's got skill and I think he's going to bring this film to a new level. Check out his reel below:


Check back for more updates as our pre-production storms on!
Posted by Daniel No comments:

Fellow Crowdfunder Pulls It Off On Their Own Accord

Several weeks ago I posted an article about how well a Jersey-based musician utilized crowd funding through Kickstarter to fund their tour.

Well, I write to you again about how a young director, Drew Bourdet, and his team are running the whole show on their own. They made a website with all the info about the project and a nice big donate button on the front page. With the story, style and general enthusiasm the site radiates, I couldn't help but get excited about the project.


When asked why they funded it themselves, lead actor in the film Jeramy Blackford said "When considering our budget, we really thought if we can do this on our own, then that extra money we'd give to Kickstarter or IndieGoGo would really come in handy. We can just put our site together in a similar fashion and keep all the funds that have been donated ourself."

I like how they're sort of paving their own way on this. I chose to use IndieGoGo just because it was an easy and reliable source to harbor the information for my film, but there's not one way to do this. If you have the resources to host the same type of thing on an independent site, I agree with Blackford and Bourdet that it's leagues better. My only concern is that people might not be 100% comfortable donating through an independent site, but I don't think that's been an issue with them at all.

With just three days remaining, they only need to raise $500 more before they hit their goal.

"We will be shooting this weekend. Period," said Blackford.

I came across their link on Facebook and started looking at their plea video and the website and got as giddy as a school girl about it. The film sounds like a heavy character piece that puts the challenge to the actors and director to pull it off well. As a director, facing a project such as this one, (or my own for that matter), is a true test of skill. If they can do it right, I think it's a perfect way to show off what Bourdet, Blackford and the rest of the crew are made of.

Check out the link above and if our production hasn't already tapped you dry, hit that big ole' 'Donate' button and help them meet their goal. I look forward to following the rest of production through their site. Best of luck, gentlemen!
Posted by Daniel No comments:

What? Two JJ Abrams articles in a row? That's not cool.

Well... I think it is. So this is from like four years ago, but hadn't ever seen it. For young aspiring filmmakers, this is the type of stuff you should be looking at to get you moving.

I look forward to JJ's career maturing a bit more so books can emerge on his style and theory. I feel like he's singing to the same tune that Spielberg did back when his career was just taking off.

The whole idea expressed in this TED talk of the 'mystery box' is a cool perspective, and although I'm sure it's a bit sugar coated and packaged nicely to fit into a concise speech (what kind of story teller would he be if he didn't sum it up and make it fantastical), the message is still there loud and clear.

Abrams is basically reiterating the idea that mystery, which generates conflict is inviting for an audience member to become engaged with the material and use that problem solving and logic part of the brain that so many contemporary films assume is too exhausting. The lack of knowing provides a catalyst to think about the story, and automatically puts the story ahead of the audience, rather than the audience already knowing what will happen.

This is a connection I've found while reading these biographies and interviews with Frank Capra. It took 10 years of his career to come to that realization. From the start of his film career in 1922 all the way to 1933, he was making films that were spoon feeding audiences. Hence, the audience was ahead of the picture.

Roughly a decade later, he really began paying attention to pacing. More specifically, he began monitoring the audience who watched his films by recording them while the screening was going on. He immediately could find out what parts worked, and what didn't. If an audience laughed, they built in more filler after the gag. This allowed the audience to laugh and not step on the toes of upcoming important dialogue.

It was in 1933 though, that Frank Capra decided to pick up the pacing in his film American Madness. He had the actors speak faster than they were rehearsing to enhance a sense of chaos. The performances were quick and messy and the cutting kept up with this. People stepping on other people's lines, the number of cuts increased, and a new sense of panic emerged. The picture was finally ahead of the audience. From then on, Capra shot and cut all of his films 33% faster than what felt comfortable.

This act alone kept audiences engaged because they did not want to miss what was being said. I think, although Abrams and Capra achieve it in different ways, they both share the same philosophy.

The other aspect that I found incredibly interesting and inspiring is the comments Abrams exhibited with the dinner sequence from Jaws. What Abrams is calling the 'Mystery Box' of story telling is essentially showing rather than telling. This immediately sets your audience up to stay behind the picture. The most humanistic scenes can be the most rattling and if you tell it right, the audience connects and is immediately sucked into it. It is not only fascinating, but it's rewarding once the audience figures out what the humanistic action symbolizes. The real challenge is finding the line between stretching those bounds too far and it becoming pretentious and too melodramatic. But that's where experience comes into play.

Even though this TED talk is a few years old, if you haven't seen it, take a look at it. I just found it very thought provoking and I think it rings true with my thesis in its own sort of way.
Posted by Daniel No comments: 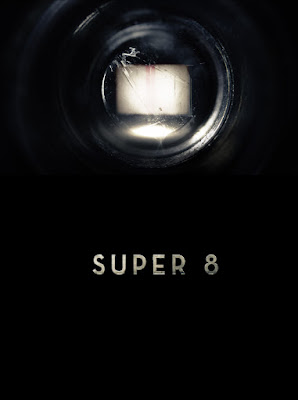 Probably a half dozen blog posts ago, I talked about the thesis I've been working on. Basically it deals with nostalgia and how that can be used as a tool in filmmaking. How the greats like Steven Spielberg, George Lucas and Frank Capra use it in different ways but all seem to play to it.

I also talked about a list of these filmmakers that I've been composing, that all seem to chime in to this universal idea. This guy, although he was towards the bottom of my list, has just shot straight towards the top.

Rarely do I get just utterly excited over a silly little trailer, but everything in this trailer, from the set design, to the camera moves, to the color palette, to the characters and subject matter-- they all exhibit the thesis to the Nth degree.

I'm talking about the Super 8 trailer that was released earlier this week. J.J. stated early on that the production is based off of Spielberg's own work with his 1970's/1980's sci-fi works. I read somewhere that the original story was based on an old draft of an idea that Spielberg wrote over 30 years ago. I think, for a guy who is trying to emulate the master of that type of film, he's headed toward a ten-fold success. It looks and feels like a Spielberg film from that era (complete with the J.J. Abrams signature anamorphic lens flare!), and that's what I really love about it.

If you haven't seen the trailer yet, check it out here:


Now tell me that doesn't look like a Spielberg film? I can't wait to see it just for that reason alone.
Posted by Daniel No comments:

Film Locations From Your Back Yard

So I came across this on /Film, who posted it from Box Office Quant. I thought it was really cool so now I'm sharing it with you! Edmund from Box Office Quant put together this project where he plugged in the filming locations of the top 2000 movies from 1910-2010 into Google Maps. Look at the map below and see what films were made in your area.


Your browser does not support iframes.

More Incentives for Your Milkman Contributors! 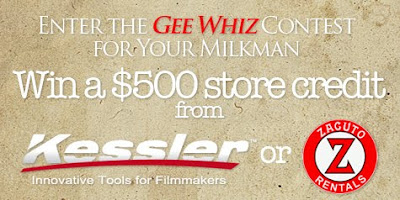 Things are in full swing and I've been sitting on this information for a couple days until I could affirm it, but here it is.

Our wonderful little project has gained sponsorship. Not by one, but two companies! 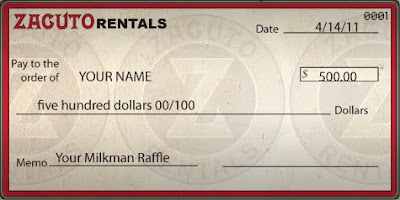 Eric Kessler at Kessler Crane, and Joe DeJulius at Zacuto Rentals have both graciously donated a $500 certificate. The rentals certificate is good for a rental up to $500 (upon availability of the gear).

Joe's a big supporter of indie filmmaking. His most recent endeavor Hank Frisco: Galaxy Defender just recently had its web release of the pilot episode and has been incredibly well-received. I'm very proud to have helped out in the production of the first two episodes.

Eric is also a HUGE supporter of the indie crowd. His company, Kessler, is known for its excellent dollies, cranes and sliders (including the Philip Bloom Signature Series Pocket Dolly), and has a page called Kessler University provides a good source of learning for filmmakers. He's ALSO donated a $500 gift certificate that can be applied to the online store. Awesomne!

So how does it work? Well, we're giving them away to the top two people that can either bring the highest amount of traffic to the page or who can get the most people to donate through their link (do this by posting any of the 'SHARE THIS CAMPAIGN' options under the video on the IndieGoGo page). If you just post a direct link, it won't count because we can't see the stats that way, so it MUST BE the exact link from the SHARE THIS CAMPAIGN section of the page. It's as simple as that. Facebook, Twitter, e-mailing your family, whatever you've got.

So good luck and happy sharing! The drawing will be held on April 14th after the campaign is over and winners will be notified within that week. Thank you all for your support thus far, keep it coming!
Posted by Daniel No comments: