Act On Your Ideas

As a creative, you get sparks of ideas.  Most of them flutter out back into the ether.  Probably one of the best things I've learned to do is to write my ideas down; and not just in one place.

In the "olden days" people would use composition books and journals to write their ideas down in.  Now the pages have been torn away and there's a much more accessible medium to work with: the digital document. 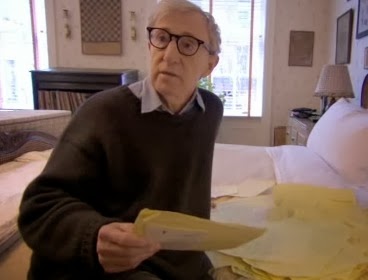 Several years ago I saw a documentary on Woody Allen that talks about his body of work, and the method in which his ideas come together.  One thing that really stuck with me was that Woody was just like everybody else in the way his ideas are conceived.  He thinks, he comes up with ideas, and then he acts on those ideas.  In the documentary, he has a little nightstand next to his bed that contains a pile of physical notes written down for film ideas and scenes he's thought about.  He even reads a few of them— all of which he could probably turn into a film but what it did for me was that it made the idea of a successful end product in filmmaking an attainable concept.  A living legend such Woody Allen simply acts on his ideas.

I've taken it more seriously whenever I have an idea, I write it down as quickly as I can digitally in my phone and then when I get a free moment, I'll send it to my long-threaded e-mail I've been drafting to myself for several years that contains every fleeting idea that I've had for a film.

Now it's not just simply writing down the idea, but it's also trying to convert that initial spark of emotion and excitement ignited by idea into words that can later on re-ignite that same passion.  You often find yourself asking "What is it about this idea that I like?".  I've found that breaking it down into the simplest terms and into the least contrived and least verbose way possible is usually the best way to go about it.

I'll often go back through my thread and look at individual ideas.  I can then tack on further thoughts to those ideas and simultaneously develop all of them at a slow, but natural and un-forced pace.  That way down the line if for some reason someone says "Hey, I saw your script, it's great, but I'm looking for a low-cost, indie sci-fi film" I've got my ideas at least half-way developed and can have that pitch ready to go.

My biggest advice is don't ignore your ideas.  Learn to embrace them, even if they're a mere infant thought.  There's probably something there that can be extrapolated; it's just a matter of self-reflection on it and asking yourself "What do I like about this?".  Act on your ideas and at the very least write them down to revisit later!