Channeling Energies of Life Experience and Hobbies Into Creative Efforts

The last few months have been a growth spurt for my creativity. I've been trying out different hobbies to gain some perspective and explore some ideas to apply in my screenwriting. The first of which has been film photography. Of course my wife thinks I'm a hipster at heart, but it's been a truly valuable and relaxing focus of my time; allowing me to unwind from work and really practice a craft.   Luckily, my dad had a 35mm negative scanner that I inherited, so I've only had to pay for the development of the film and nothing more. Here are a few:

It's been truly wonderful to get back into photography and has reignited my passion for portraiture. There's something indescribably magical about shooting on film and I only wish I had more experience under my belt doing it in film production. Knowing you had a good shot when you took the photo, followed by the waiting for processing and then seeing it for the first time sometimes weeks later is rewarding. Especially when it turns out better than you had hoped. It's about catching that right moment and praying that it turns out. It's wonderful. 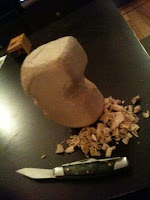 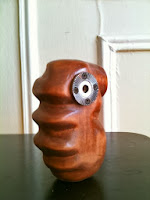 Along with that, I've taken up a hobby that my dad taught me when I was little.  I'm talking about whittling. Ever since I got my Blackmagic Cinema Camera, I've had my eye on an Aaton-style wooden hand grip but I just didn't want to spend the $600 that people have been charging for them. So I bought a knife and a block of basswood and got to work.   After a week of working on it in my free time (maybe 15 hours total), I wound up with the the grip I set out to make.  Again, it's been relaxing and almost meditative to craft this ergonomically-molded device by hand. It's something that I'm proud of and will get great use out of, and at least to me, is a beautiful little piece. 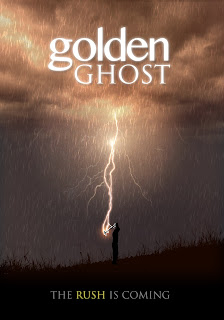 And now, I'm about to embark on an experience in metal detecting, which is something I've always been interested in and finally forced myself to commit to.  From this, the spark of interest in deteching has inspired my next screenplay, which I'm calling "Golden Ghost"; it's There Will Be Blood meets Castaway in a gold rush-era historical fiction film.

The tale is about a man left alone with only his thoughts and dreams of striking it rich as the last remaining citizens of a mining town abandon ship; forcing him to face the possibility of failure and question his sanity in the process as he attempts to find the largest rumored gold deposit in US history.

I think my boon into sort of 'rustic' hobbies has been a backlash of me searching for a creative muse with which to jump into the next draft of my current screenplay, Ten Weeks In The Cuckoo Clock, as well as finding the right idea for my next screenplay, and after several months, I feel asl though I've finally struck on something.

I'm about twenty pages in on this screenplay, and have the rest of the film plotted out on 27 note cards, which describe individual sequences and signposts that occur for the rest of the film.  I took a lead from Vince Gilligan and the rest of the Breaking Bad writing team by framing these note cards as newspaper headlines rather than dry descriptions of characters.   By taking this approach, there's motivation, objective and the enabling of creativity to approach each piece of the film.  Now, I probably should just be focusing on writing, but after penning a very visually-interesting scene, I was inspired to create a rough teaser poster seen above.

I've always heard you can only become a better writer if you first write more, and secondly have something worth writing about.  "Write what you know," they say.  And the only way to write fresh material is to seek out experiences, and "know" more.  I feel as though providing yourself opportunities to have experiences and appreciate the romanticism of life will only help in articulating thoughts and ideas onto the page.
Posted by Daniel