Sometimes the universe aligns and you just can't escape the call of a great piece of artwork. In this case, I'm talking about 2001: A Space Odyssey. Upon the release of the Daft Punk album that just came out last week, I paired the final song on the album with the 'journey' at the end of 2001 in a little short edit I put together. To my amazement the track synced up incredibly well with the film. So I tossed it up on Vimeo for a day with very limited reception. As soon as I put it on Youtube, it found its way on the front page of Reddit within a matter of hours and quickly became fodder for debate as trolls waged war with one another regarding whether or not the song actually synched up with the video. It did. Screw you if you think otherwise.

And then just a few days later, something popped up in my newsfeed on Facebook about a book that was released in limited print in the 70's that somehow was buried in the archives of cinephiles' libraries until now.
Cinephilia And Beyond released a blog post about it and (for now) are offering the e-book scan of it for download. Get it while it's still hot and learn a thing or two! I haven't had a chance to read it yet, but it looks fantastic and there's a neat picture of my friend Bruce Logan in it working on some of the miniature work! 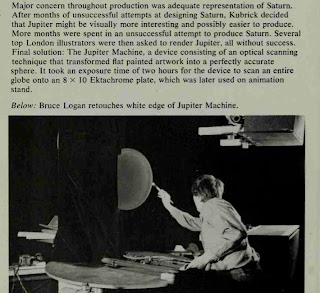 The Making of Kubricks 2001


To see the full article about it go here! Also, I hope to have more posts coming your way soon, I've been pretty swamped working at my new job and working through the next draft of my feature film script which is officially registered with the US copyright office! Anyway, more news to come!
Posted by Daniel