Onward with the Thesis! 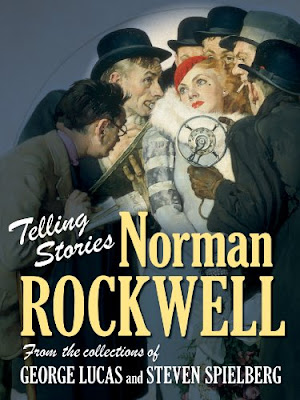 So another week closer to production on 'Your Milkman', and another book down towards my thesis.

On Friday, I finished up the last book on Norman Rockwell [Telling Stories: Norman Rockwell from the Collections of George Lucas and Steven Spielberg]. I think at this point I pretty much get where the guy was coming from. Articulating the scope of his work is definitely still difficult to do, (hell, even the books I read took 250+ pages to remotely come close), but I think once I can describe any of these individuals I'm researching, I'll have a firm grasp of what I'm going for on my thesis so I'm not discouraged.

The most interesting content came bookended at both the head and tail of the book. The middle described piece by piece of the two filmmakers' collections in chronology of how they were produced, a few anecdotes here and there and provided a nice historical lesson that illustrated most of his motivations in creating the pieces he did. Interesting, but not pertinent towards my thesis. It was the beginning and the end that really discussed the ties between Rockwell and these filmmakers that I was looking for.

I need to go back to the pages I marked to make some exit notes for myself, but basically George Lucas states exactly what I was hoping he would, in some of the last pages of the book. And honestly, I would kill to work for the guy after hearing it, despite heavy fire from his critics.

When Lucas was younger and involved in the heyday of American Zoetrope, he got it.

And what I'm really noticing, after getting into reading about these individuals on my list, is that they start out in this pure form of an idea. It becomes their compass for filmmaking (or painting in Rockwell's case). They have a style and reason to make these projects.

As their careers progress, the ideal gets tainted and watered down either by their own limitations, the individuals they work with or the film industry itself (Capra and Lucas). Or, in some cases they just use it as a stepping stone to explore their own individual filmmaking voices a bit more (Rockwell and Spielberg). It excites me that I've become aware of these top dogs' ideals and I feel like if I ever had a chance at making a career for myself in the industry, this is how I am going to do it. 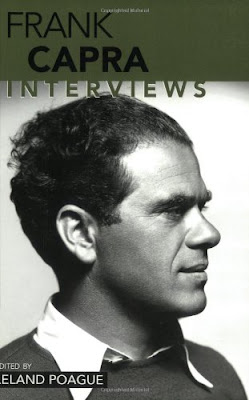 So next up on my reading docket is Frank Capra Interviews. I've made it through the introduction, chronology and filmography and I'm liking it thus far. I didn't really know as much about Capra as I did Rockwell, and the author seems to lean towards a realistic portrayal of the man, rather than painting him as a national hero or great American, which I kind of appreciate. Apparently Capra had an affinity for stealing other peoples' stories and telling them as if they were his own and twisting the facts of events in his career to make them a little more magical. Capra was a storyteller and I find it interesting he did such things even in real life to paint a persona of himself that was happier and more wholesome than he probably was. It was public relations before PR was even a career.

I'm digging the book thus far and am really looking forward to reading the rest of it. I also have a documentary coming in the mail that was narrated by Ron Howard (another filmmaker on my list for the thesis, and someone who I believe has a connection with Capra) about Capra titled 'Frank Capra's American Dream'. So this pretty much gets us caught up on where the thesis stands. Damn do I love this stuff.
Posted by Daniel