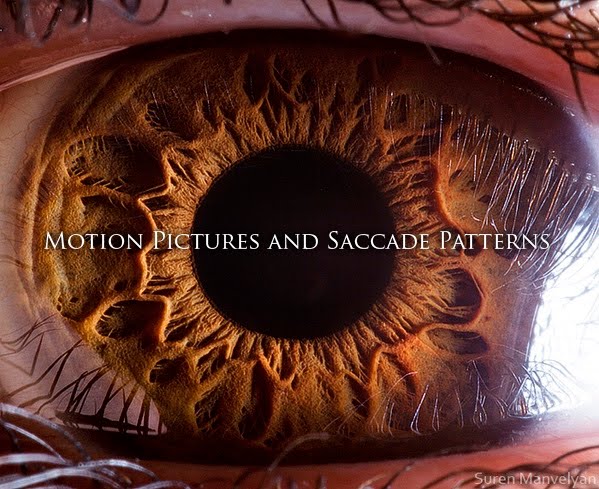 I'm thrilled to post this. So back in 2008 when I was finishing up my last semester at Purdue, I took in tandem Italian Cinema and Mafia In The Movies. There, I learned how to analyze films in a totally different and more empirical approach. Both classes were taught by the same incredibly inspirational professor, Ben Lawton.

One of his lessons that really grabbed me was on the eye's movements and how that reflects the analysis of film. So let's start with a quick lesson in biology.

The eye can do two things fixate and saccade. The eye fixates when it focuses on a particular object. The eye can also saccade, which is the motion of the eye as it searches for its next area of fixation.

With that said, there is a principal called 'saccade patterns' in which the eye looks from left to right (in the same way that we read) and up and down. The fixations and saccades are generally caused by a cue or just the general composition of the subject that is being looked at. Basically, your eye wanders in a relatively predictable pattern depending on how a subject looks and behaves (if it can move or change color).

So here enters this incredibly interesting article. David Bordwell is a pretty well-known film theorist and looks at film theory in a pretty interesting and scientific way. I didn't know about this blog until today and I can't recommend it enough. So when you're done reading this, go check out his blog here.

Bordwell and Dr. Tim Smith of Birkbeck University of London have teamed up. Bordwell's knowledge of film theory and Smith's knowledge of cognitive psychology (particularly the movement and analysis of the eyes) provide a great grounds for analyzing film and visually mapping out what an audience member sees and processes while watching films.

The article breaks down a scene from There Will Be Blood, and hypothesized beforehand the cues and frame movements, sounds and facial expressions in the particular scene that would draw the eye one direction or another. This stuff is simply fascinating. Watch below and see for yourself.

As you can see, there's a general pattern to the motion and even though there isn't camera movement, we're essentially "editing" ourselves in the same continuous shot between faces, hands and actions. The article (I think it's Smith) calls the term Attentional Synchrony, which is basically the pattern that the majority of eyes follows and are all explicable by a cue of some sort. A change in eye line, an indexic point of the finger, a turn of the head, an auditory cue from the actor speaking his line.

I really need to read through Bordwell's theories and Smith's research a bit more but I was incredibly fascinated by this stuff. If you want to watch more of Smith's research, a bunch of videos are hosted on a Vimeo account for his research project titled DIEM (Dynamic Images and Eye Movement project).

Research is just in its infancy now for this topic, but I feel like there is a lot to learn from it. Capra changed his filmmaking style mid-career by making his actors play the scenes out 40% faster than their initial comfortable pace. What happened was dialogue began overlapping one another, glances were more aggressive, the cutting was a little quicker and the films themselves were just faster-paced. It created a higher excitement for moments that didn't even demand it. Capra had an explanation for this. He stated that at a normal pace, the viewer was ahead of what was being shown. There was a lot of lead time where the audience already knew what was going to happen because they had already seen and processed the image and had gotten all of the information out of it. By speeding up the pace and providing a bit of chaos, the attention of the audience was demanded in full and they suddenly became participants in the film more than just viewers. They had to listen over one person speaking to hear the other. They had to follow action and figure out the gaps that had been taken out in editing. By gaps, I mean gaps in time. Capra said rather than following the main character from an elevator, having him get off the elevator, walk through a lobby and out the front door of the building, you could simply show the character enter the elevator and then show them leaving the building. It was a matter of being one step ahead of the viewer rather than one step behind.

I think these visual patterns provide a little more insight into that. Watch the clip once again as soon as Paul Sunday, Daniel Plainview, H.W. and Fletcher ALL get involved in the conversation and a back and forth begins with Daniel and Paul, the eyes are moving ahead to the next speaker even before the previous speaker finishes. There's an anticipation that arises once the viewer gets a feeling for the rhythm and pacing of the dialogue. They know that Daniel Plainview is almost finished with his question and their eyes immediately go to Paul even before he starts speaking.

Had there been an overlap in dialogue, the viewer would be struggling to keep up with the back-and-forth the two main players are delivering. I've watched the clip several times and have picked up a few other behaviors that aren't really talked about in the article. One that I found really interesting is the way we look at faces.

In a real face to face conversation, you look into the subjects eyes. But on here, it clearly shows that the audience on average looks at the bridge of the nose. If you look at other clips on the DIEM Vimeo page, that's a common behavior. Interesting, to say the least. What it means, I can't really deduct.

So how does this all apply to filmmaking? Well, it just shows the importance of performance, screen direction and shot composition. I would LOVE to see Smith and Bordwell continue analyzing movies this way. Bad movies and good. I think there's a lot to learn from this type of research.

To read the whole article in its entirety, go here:
http://www.davidbordwell.net/blog/?p=12417
Posted by Daniel