Breaking Down Your Script 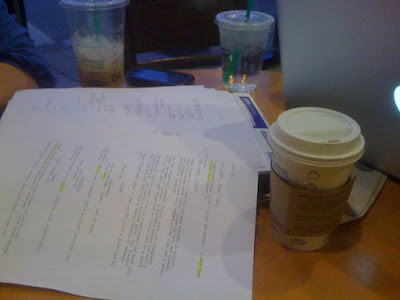 This weekend, I met up with two really good buddies of mine, Chris Voelz and Matt Mann at the Starbuck's down the block. We started doing the script breakdown. I've never done one officially before, and I'm guessing most indie folks haven't either. So I wanted to do a quick writeup about it.

There are several programs out there like Gorilla and Movie Magic Scheduling that do scheduling and script breakdowns, but alas, I don't have those. So we did it in Excel instead. Basically a script breakdown is an organizational document that maps out and color codes principal actors, extras, props, costumes, set dressing, special effects, stunts, vehicles, sounds, music, make-up/hair, scene breaks and locations. From that, individual departments on the film can reference it and know that for setup 2a, they'll need a coffee cup, a piece of pie and a cigarette in the main character's right hand. It just generally helps keep everyone organized and keeps small details from being overlooked.

The other main benefit of a script breakdown is that it gives you a great map to put together a detailed cost estimate and can help you shape your budget a little more. I'm pretty sure that the project can be made for less than the $9,000 that we're asking for on the IndieGoGo page, but the only way to truly know that realistic figure is by doing a breakdown and figuring out the all around production costs. And that's what we're heading towards. I'm still debating whether or not to actually publish it, but my hope is that we'll come in at around 5 or 6K and we can encourage potential contributors to aim for only 50% or 60% of the amount we're asking for, I think that makes things a little more encouraging for people thinking about helping out with the project.

The headlined image was taken courtesy of Chris's iPhone and shows my first pass at it. If you look closely, you can see the scene breaks with a dash through the dialogue and I started highlighting props. Matt is working on breaking it out further and getting it a bit more organized.

The next step in the process, pending the cleaning up of our script breakdown, is finding a UPM willing to sit down with us to calculate a rough budget so we can keep things rolling without blindly throwing money at it. Hopefully within the next few weeks, we can find someone willing to do that for us. Got someone? E-mail me at dskubal@gmail.com
Posted by Daniel