Not much in this world gives me more joy than learning and having "breakthroughs" in my understanding of what I'm passionate about.  I like to think.  I write a lot of notes.  Most of them are kept private to me in quick emails, google documents or jots on scraps of paper.  I do this until they've had enough time to gestate into a fully formed idea, and over the years it's just become my working process.

The focus for me lately has been in my further understanding of screenwriting as an artform.  And over the last few weeks a few big breakthrough pieces I've stumbled across have opened up the floodgates in my thinking.  Somehow, every time this happens, it almost always is perfectly in-sync with something I'm needing to solve in a current project I'm working on, and this is no different.

Since the start of the year, I've began plotting out and exploring a screenplay that I've been collaborating on with a fellow colleague.  While in the past, I've typically been able to knock out a first draft in a matter of weeks— this one, I've been taking my time on and really trying to see the whole forest before I venture into the woods.  I carefully wrote the first 20 pages or so, but felt like I was wandering into some bad territory in the story, so I deleted the last 6 or 7 pages and took a step back. 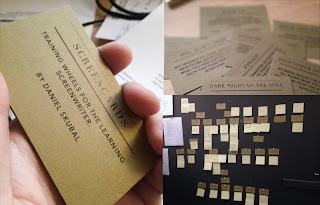 Something that has really helped me keep my head on straight has been the mixture of Syd Field's Screenplay: The Foundations of Screenwriting (which I've been kicking myself for not reading earlier), as well as this tool I devised for myself to keep things straight and in order for the events of my story that I've been calling "Screencards".  It's really nothing more than some cards with the major "formulaic" beats of the story, and a little reminder of what each piece should contribute to the structure as a whole.  Think of it as the blue print or "training wheels" to help plug in what you know about your story.  It's the most commonly-identified beats (maybe identified with different names) within a screenplay structure that writers can settle on.

I don't necessarily prescribe to the idea of formulas in the long run, but understanding how well-written screenplays function and the things they have in common with one another is certainly not a bad place to start as far as I'm concerned.

I'm sure once I've been around the block longer in this world of screenwriting, I won't need them, but for now just having a place to pin ideas that says "This part of your story needs to generally do X" helps free me from worry about "what happens next".

So I've been pinning the ideas I knew I wanted to have, and probably once a day, I'll visit the board, shuffle some things around and maybe a new spark will hit me that causes me to form an even clearer picture of what I'm after here.

Once I felt like I had exhausted my current ideas and pinned everything up, I took a break from the process and circled back to that Syd Field book I mentioned.  Aside from his brilliant explorations and observations, a couple major things have really stuck for me.  He says that before you should even think about putting pen to paper (or ehm, E-ink to screen, I guess?) that you should have 5 things figured out, in this order of importance:
1) Your main character
2) Your ending
3) Your beginning
4) Plot Point 1
5) Plot Point II

Another thing that was fascinating was his description of "sequences".  I've always used the term as a catch-all for a nondescript duration of edits.  For me a sequence could be three shots in succession, or it could be 3 scenes, depending on the context.  But he defines the term as a clustering of scenes serving one objective, i.e. "Our main character attempts to do X".  On the surface, it was rewarding because I had never really heard a screenwriter address the idea of the sequence (which maybe just makes me a newbie in the craft), but I think what really stuck out to me is the attempt at reducing the daunting task of writing an entire 120 pages screenplay.  By clustering scenes together and saying "These 4 scenes are about INSERT OBJECTIVE", each scene is just the WAY that that objective is achieved or revised, and you've suddenly reduced the number of things to think about from 4 to 1.

It sounds silly, and way too intuitive, but reducing the complexity of the job helps open you up to focusing on the more creative material, which I think is what Syd is attempting to achieve here.

The other big lesson I'm learning here is that beyond simplification of the process, patience is the other takeaway I'm hearing from this book.  I've always heard about screenwriters who spend a year or more working on a single screenplay, and my assumption was just that they were too exacting in their first draft.   And while I'm a proponent of opening your mind and letting words flow from your fingertips as subconsciously as possible, I think I've perhaps neglected the other end of the spectrum; the consideration of the grand idea and structure of your story.  It takes time, it really does, to write a genuine original piece without fudging and faking certain aspects that you don't yet understand.

And it's been a compounded experience for me, as I'm a writer often drawn to period films concerning lifestyles and careers that are different from my own experience.  This takes even more research to accurately portray their world.  I think as I'm writing this, the reason I'm drawn to these types of stories is not in the exploration of "what it was like back then", but more from my yearning to bridge how human and similar their experiences were back then to ours today.  Really, I'm going against the grain of the thesis I was so fired up about when I first started this blog; the anti-romanticist.  Life is real, messy, gritty.  It's not easy.  We all deal with problems, and even though something that seems so different and distanced by the span of time from how our lives are in modern society, it really isn't so different.  We're saying the same things as we were 100 years ago about politics, religion, economics, the world.  The context is different, but the content is the same to a large degree.  I just think that's cool.  That's probably the closest thing we can get to an emotional time travel right there: connecting emotionally to past events by drawing comparison to similar instances in our modern day life.  You're being reminded by both the unfathomable expanses of time, as well as the finitely minuscule separation we have from our ancestors.  We're both totally foreign from our ancestors, and at the same time we're mirror copies of their fears, dreams and comprehensions.  It's truly incredible.