So as I've been going through these Tone Cuts, I've been walking away with all kinds of pearls of wisdom. 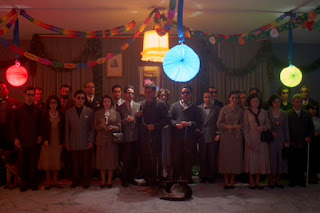 In The Conformist, you see just how carefully crafted shots can be.  The use of color, balance and movement are quite revealing if you pay attention to them.  The moving master shots in this film are inspiring.  They almost always begin with a reveal of information, only to pull out, pan or dolly to reveal more information in the frame; whether that's introducing a new character, balancing an unbalanced frame, revealing a prop or symbol in the background or simply lending to a change in character progression.

That type of camera movement can help keep an audience entertained and guessing what will happen next.  In this case, the storytelling is ahead of the story itself, which is rewarding rather than insulting to audiences.  Those moving masters are juxtaposed against quicker cutting into a near-ideal pacing for a film of its tone.

In my previous post I touched on a theory I have of mine dealing with tension and release of storytelling and how crucial that is to the pacing of a film, which is reflected in how a film is perceived by audiences.  If a film is a constant pace with no relief in tension, the film can feel longer, drawn out, boring or redundant; even if the cuts are Michael Bay-fast.  It's straining for an audience to give 100% attention for an entire film.  When applicable, a break in the tension of a long establishing shot, or even a moving master that doesn't cut away can provide some source of relief to the tension and help balance out the pacing of a film.

There are numerous other things I walked away with from The Conformist, but that is perhaps the most significant and prevalent. 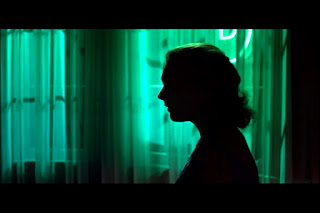 My second Tone Cut was Vertigo.  I wanted to try watching the film before I began cutting in tone just to try something different.  I was grateful I did.  Within the first five minutes of my cut, I was able to see the notion of 'invisible cutting' where the technical aspects of the film are masked by their necessity and ability to propel a story along.  I was completely blinded by the fact that nearly 70% of the film is Jimmy Stewart looking at things and how brief and to the point the scene changes were (always accompanied by a crossfade to illustrate a passage of time).  In fact, as I was going through the tone cut, I was getting annoyed with how much this happened.

I would love to do a supercut of every shot of Jimmy Stewart not speaking, and just looking at things.  Because I'm a bad film student, I must admit I've only seen a handful of Hitchock films up until this point, so I was unaware of how frequent he employed this technique.

It wasn't until I watched the 90 minute documentary on Rear Window that it was pointed out that the reaction shot is such a prominent trait of Hitchcock films.  It was like a lightbulb turned on and I immediately understood how the effect of that technique could so powerfully penetrate the subconscious of the viewer.

Again, to reference my own posts, I wrote a few months back about the Kuleshov effect.  As I was researching it, I came across a little vignette about the effect as explained by Hitchcock.  And now realizing just how much of a reoccuring technique it is across his films, he's probably the best person to be talking about it.

Beyond the reactionary shots, his very strict grammatical usage of camera movement and shot progression is something that really stuck out with me.  He wrote the book on shot progression in terms of moving in consistently from a wide shot, to medium shot, to closeup when the dialogue calls for it.  It's the most by-the-books technique you could ask for and that alone is something to strive for if you call yourself a filmmaker.

My third film was Citizen Kane, and much like Hitchcock, stuck pretty close to the rule book in terms of shot progression and crossfading to indicate a passage of time.  Citizen Kane illustrates an understanding of what both The Conformist and Vertigo achieved individually; the control of tension and relief, moving masters and a by-the-books use of film grammar.  And while Greg Toland and Orson Welles broke the ground on the way the film is shot, it really sticks to the very basics of storytelling.

On that note, I spoke with a co-worker of mine after getting through a majority of the tone cut and he admitted to me how uninspired he was by the film and had a hard time understanding why it is so revered beyond its technical achievements.  He made a point that I'd never heard anyone bring up before.  He said that the way the film is shot, although technically masterful, didn't give him an intimate feel for the character.  "It felt as though the frame was always a barrier rather than a window" which I thought was interesting.  He went on to tell me that it didn't allow him to feel for the character, and was always at a distance from him.  Any time the camera moved to make an emotional point, it felt contrived and only distanced him further.

It led me to thinking about the cinematography of the film and although I don't feel as strongly as he does about the film, I do believe that in a sense, he is correct.  The cinematography is similar to how Tim Burton films conduct the camera, in that the camera moves don't move for the character in the story, but rather move for the style of the story.  Canted or extreme angles of characters give an offputting feel.  They're uncomfortable and can easily go beyond their value in telling a story.  A wide angle push in on Kane's face is uncomfortable to watch, and most likely attempted to portray him as a monument of a man; a goliath of an individual, it does indeed offput the audience and distances them from connecting with Kane as a sympathetic character.

It's an interesting discussion to say the least and I can certainly see the argument my co-worker was making.  Regardless, it was a masterpiece in its own right and certainly worth an analysis on many fronts. 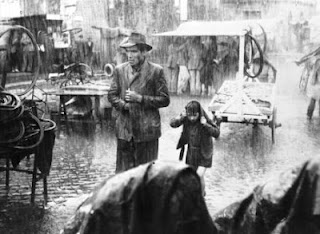 Now I've began my fourth film, one of my all-time favorites, Bicycle Thieves.  DeSica is a master at invisibly cutting and moving the camera because the story and characters are so captivating.  I'm actually having trouble noticing every cut as I go through it because I find myself getting lost in the blocking and performance of the actors.  I'm sure I'll learn more as I get through it, but for now I simply wanted to get my ideas down to serve as a log of my education while doing this little project of mine.