My Journey Through Kerouac's On The Road 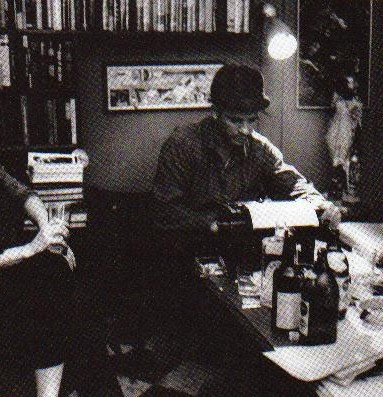 I'm just coming to the last pages of On The Road as part of the research I'm doing for a screenplay I'm eyeing to write.  I've come to one conclusion: this is some dangerous literature for a glittering, wide-eyed young pup wanting to add scores to their life experiences.

His writings stir up something indescribably 'mad', as he puts it.  It's an itch that even strikes me at 25 and is a lifestyle so far removed from my own that I can only live it vicariously through the text.  That's the power of On The Road.

The same itch that Kerouac had found for his book hit me at age 18 and spawned a similar adventure and even a similar traveling circuit as he took in his first round of travels, but with much more preparedness and cutting out the trip east of Indiana.  My adventure was ended abruptly in a pretty terrible car accident, though.  But it still left me yearning for more afterwards.  Life on the road in America is dirty, but terribly romantic.

In reading On The Road, I can see how this morphed generations; especially considering how constricted and conservative society was at the time.  This became an almost how-to guide for anyone lost in the world and looking for adventure.  It's the cheap way out of problems, and although Kerouac's trek doesn't land him with what he was hoping to discover, it's understood that it's the adventure itself that matters.  It's being down and out and making something of your situation.  It's learning to appreciate the small stuff in the hardest of times.  Some cultures send their children out on their own into the wilderness for months on end to learn self sufficiency.  They leave boys and return as men.  I see this same journey in On The Road.  Although the landscape might be different and Kerouac was certainly not a boy when he began his life on the road, it's about learning yourself and learning the world and returning with wisdom.  It's your basic hero myth.

Kerouac paints a picture of adventure with poetics and romanticism; penning a simplistic and free lifestyle set against a beautiful America.  It's fantastic and wondrous, but only runs so deep.  I'm sure the masses who attempted this trek after finishing the book were sorely disappointed when they found themselves stuck in the middle of Kansas on a back country road, drenched in cold autumn rain with hunger pangs hammering away at their ribs, tremulously dangling their thumb for a ride as butterflies flew out of their empty pockets.  It's a sucks-to-be-there-but-sure-sounds-good-on-paper type of situation.  But I think most good literature is like that.  There's conflict, and you feel for them, but at the same time you feel wrapped up in the warm blanket of poetic pages and know things will be fine in the end.

Kerouac introduces future generations to a whole vocabulary of colorful words and philosophies.  He writes continuously through the book about the 'mad' people they meet and the 'kicks' they get into.  That's the heartbeat of the beat generation, and I think the real value that resonated with that particular generation.  It's appreciating character, and acting on impulse.  I think, at least for the first generations to read this, it spoke to them as a call to break free from conformity and monotony, and live life wildly on impulse.  It's as if the book says 'I know we're all messed up, but that's just fine.  Go out and live messed up together.'

With that said, there's also another matter of fascination: the syntax of the book.  I chose to read the 'Original scrolls' of On The Road rather than the edited version that Viking published in 1957.  The book is one long paragraph and was originally written as one continuous scroll that, to Kerouac, represented 'the road'; the words were simply the characteristics of that road.  I think that alone elevates the book from being classified as pages of poetic journal entries into the realm of artwork and true American literature.

There's been a myriad of different critical reviews-- some called it complete incoherent garbage while others praised it as a masterpiece.  I fall somewhere in between.  At times, yes, it does feel like rambling journal entries that are scattered and difficult to follow, but at the same time I don't think you could write such poetic prose without mapping it out (and that's made clear in the foreword discussing his manuscripts and journals leading up to writing it).  Although it's loose in structure, it's obvious that Kerouac put thought and care into the structure and rhythm of his sentences.  There's no denying that.

I suppose with every generation, sub-cultures form.  From that, martyrs, icons and sign posts arise that help shape and explain those microcosms.  On The Road does that for the Beat culture.  To that first generation that got their hands on it, they lived it in spades.  To me, reflecting on it years later, I can still appreciate it and understand its significance.  And even today, the ideals of that lifestyle and the yearn for simpler times reflected in Kerouac's book are even moreso wistfully sought.