Everything you wanted to learn and more about animation 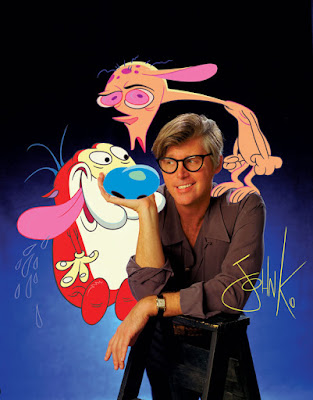 You might not know him, but it's nearly certain you've seen his work. Ren & Stimpy creator, John K., is a man to admire.

I recently found his blog and nearly two weeks into my discovery, I'm finding myself spending at least an hour a day going back through his archives and reading through the wealth of knowledge that he's shared with the world and am trying to absorb it all like a sponge.

The guy's a living legend, and it's easily apparent from his blog that he's a life-long learner and loves to share his most recent observations with anyone patient enough to read.

As I said in my previous post, I'm preparing to make a cel-animated piece called "Waltz with Tinsel" so the timing of finding his blog couldn't have been more perfect. Just skimming through his posts has been an awesome crash course on everything animated. From techniques and tips to handling the business side of things, to the whole mess of history that goes along with that beautiful art form-- he covers it all.

I think even the most savvy film geeks who might not even necessarily be into animation could get a lot out of it as well. Check him out here!