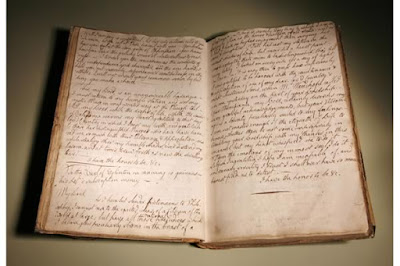 It seems like the more focused my attention gets with this thesis, the more things seem to crop up that reaffirm the idea.

I mentioned awhile back on Living in Cine that when I started this thesis, I began putting together something I referred to as "The List". The list is basically my go-to junk drawer of thoughts, theories and individual items I've deemed as either nostalgic, or culturally significant that belong in the realm of my idea. And in just a year and a half of existence, The List has become my self-made muse.

It's sort of taken on a mind of its own at this point and one of these days I am going to organize it into more of a catalogue to separate my theories, borrowed quotes and cultural elements into separate categories.

While perusing the internet a few weeks ago, I came across this thing called Commonplacing. It's an old 18th century practice of thought that helped philosophers, authors and poets comprise their thoughts. Often a moleskin notebook, the author would record everything from fleeting thoughts of their own, quotes they heard in passing, to passages from books they read. The idea was all the same: record all ideas that inspires you in a certain subject matter. Sounds like The List to me.

After reading into it a bit more, my chest quickly became puffed up and proud once I heard that the likes of Mark Twain and Ralph Waldo Emerson kept them, and that the practice was taught at prestigious schools such as Oxford and Harvard. Commonplacing generally died out as paper and typewriters became more readily available, but the idea is still being used today by artists and authors to physically help organize their thoughts. (One such artist was Tupac, and the ever-entertaining Something Awful has published some of his thoughts).

While I would love to get my hands on Mark Twain's commonplace book, I think there's something said to just keeping the commonplace book for personal use only. It might be an amazingly fun sociology experiment mapping the thought patterns of a great mind, but some things are better left a mystery to discover on your own. I don't think one could really find inspiration the same way as if you discovered the idea yourself. It's a secondhand experience of inspiration. I think that's where the idea of the commonplace book resonates for me: it's a personal catalogue, tailored just for your brain, made to stimulate your thoughts and your thoughts only.

Even though the term is new to me, I feel like the application behind the commonplace book are still being put to good use today. Journals, blogs, even music playlists all provide the same service: a bin to collect one's thoughts and draw inspiration from. So here's to inspiration, no matter how you find it (or organize it for that matter)!
Posted by Daniel